Prefabricated houses have garnered a high level of interest since the turn of the last century. A prefabricated house, or prefab, are dwellings that were manufactured off-site in panels, modules or sections, that are shipped and assembled on site. Prefabs could be considered the most economical way of getting your own dwelling and form an essential part of modern real estate, however, when first introduced it was labelled as unreliable, a tag which it still seems to carry even to this day. It could be said that 3D printed structures are now as ambiguous as prefabricated houses were in the 20th century. Can 3D printing compete with prefab in the niche of affordable housing? How to get the 3d printed house? How much does it cost? To answer these questions, we should first determine the term “3D printed house” and its types.

What is a 3D printed house?

To get an idea, just imagine a huge FDM 3D printer extruding a layer of material that solidifies, then another layer is laid over it, and the process is repeated until completion. Although it may be obvious, we should point out that construction 3D printers are only capable of making the frame of the house which consists of the walls, overlaps and very rarely the roof. All other elements, including doors, windows, stairs, plumbing and many other elements have to be installed in the “old fashioned” manner. From this point, 3D printed homes are no different from any other standard dwelling. The advantages of 3D printing a home is the low cost and speed in which the frame can be built. It is important to note that such technology is very often combined with traditional methods of construction. In general, there are two main approaches which determine the types of 3D printed buildings:

The latter method is more widespread, but in our opinion, the first process has much more potential in long-term development.

3D printed houses and traditional prefabs have more in common than you think: Both regular prefabricated houses and 3D printed homes are made much quicker than conventional dwellings. At the same time, some essential features are typical only to 3D printed buildings.

Another approach to the use of 3D printing in the construction of dwellings involves 3D printing panels off-site, usually in a factory, and shipped to the site and assembled. 3D printing off-site allows for greater adaptation compared with 3D printing the structure on site, but the time that is needed for prefab will increase as well.

Recently, construction 3D printing stopped being something extraordinary with new 3D printed houses going up around the world every day. The United Arab Emirates was the first country to have a 3D printed office, so it’s not farfetched to suggest that the commercial sector in the construction industry may soon acknowledge the advantages of construction 3D printing as well. Nevertheless, this technology is still quite rare and attracts everybody’s interest. For now, let’s focus more on cases of using 3D printing technologies for building dwellings.

Chinese companies were among the first to begin active development in the perspective technology of 3D printing buildings. One of the first 3D printed building companies is a Chinese construction company called WinSun that 3D printed a 6-Story apartment building and a mansion. Another construction company that can be called a pioneer in construction 3D printing is HuaShang Tengda. They created a two-story house in 45 days, with a total area of just over 4305.5 square feet (about 400 m2). The architects claim that such homes can withstand earthquakes.

American inventors and entrepreneurs also joined in on the technology race. The first 3D printed, fully permitted house appeared in Austin, Texas and was made by American company ICON. The representative of the company claims that their technology is capable of 3D printing a one-story house of up to 800 square feet (about 74.3 m2) in just 24 hours, generate almost no waste and cost only $4,000 to make. Such homes could be particularly useful for developing countries.

Russians also have recognized the value of construction 3D printing. One of the most prominent results is a house built in Russia in 2017. The building that appeared in Yaroslavl is actually a prefabricated home (modular house), most sections of which were 3D printed.

The project was realized by a group of companies «AMT-SPECAVIA». The building of the house began in 2015. The framework was 3D printed separately and assembled on site in one month in December 2015. The regular formulated cement was used, the height of the layer was 10 mm and width about 30-50 mm. The speed of manufacturing is up to 161.459 square feet (15 m2) an hour. During the summer of 2017, the roof was installed, and the interior and exterior were finished. The total area is almost 3230 square feet (300 m2).

Apis Cor is another company using 3D printing technologies for buildings, which appeared in Russia. It was founded by Nikita Chen-yun-ta, which eventually moved to California, where the company is based nowadays. Today Apis Cor is one of the most prominent startups in the sphere of construction 3D printing. Instead of the prefab parts made via 3D printing, they 3D print the whole structure right on the site from start to finish. The machine they use is highly productive and mobile at the same time. Apis Cor claims that it works in polar coordinates and very soon they will implement functions of inter-story floors and roof printing, as well as automatic horizontal wall and foundation reinforcements placement.

The 3D printing machine by Apis Cor has relatively small dimensions - 14.7 ft long (4.5 meters) by 4.9 ft high and wide (1.5 meters). The weight of the machine doesn’t exceed 2 tons, and it can be transported to the construction site using a standard truck and crane manipulator vehicle. Commissioning works on site occupy no more than an hour.

A Ukrainian startup called PassivDom plans to use 3D printing robots to print parts for autonomous houses. ModulOne is their first model of an energy efficient and self-sustainable 3D printer that can be used in any climate. Its main features are:

According to Project Milestone, five 3D printed houses will appear in Eindhoven in the Netherlands in the nearest future. It is said that one of the houses has already attracted more than 20 applicants willing to purchase the non-traditional dwelling.

Is a 3D printed building worth it?

The 3D printing technology that was developed recently for construction is not perfect, but it has the potential to compete with both traditional and prefabricated homes. What is even more important is that they are built in next to no time, with less material and waste, which as a result, becomes much cheaper than other construction methods. More advantages and disadvantages of 3D printing buildings include:

3D print a house or get one prefabricated?

3D printed houses turned out to be both cost-effective in production and environmentally-friendly at the same time. The surface of the building looks rough and should be post-processed, but they still remain very cheap and quick to erect. In contrast, manufactured and modular houses are more expensive and take some time for fabrication. Nevertheless when you count not only 3D printed framework but also the cost and time of additional elements like building the roof, plumbing, electricity and other utilities, the difference between 3D printed and prefab building are much less than you might think.

Furthermore, manufactured and modular houses have been in use for decades, there are plenty of standards and laws that regulate their quality, but the regulation that governs 3D printed buildings are still in the process, and it will take some time before 3D printed houses become properly regulated and mass adopted. So to sum up, construction 3D printing without a doubt is the technology of the future that has the potential to revolutionize the market of affordable homes, but for now, prefab homes are out of the competition. 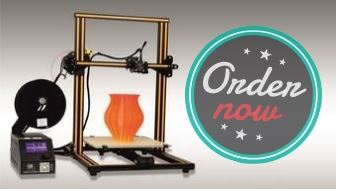