We all know that fidget spinners have started a craze by gathering so many fans and making 3D printing platforms explode with endless ideas to create them. They have their positive side to them by lowering stress and also helps people with hyperactivity disorder. It is safe to say that this toy has brought tinkerers inspiration and even given them an outlet to make some money.

Unlike kids and their toys', some imaginative adults have decided to make an enormous 3D printed spinner. Lauri Vuohensilta and Anni Vuohensilta are two hobbyists who have their own YouTube channel, “Beyond the Press.” Not so much after the monetary value of their idea, they wanted to create a spinner mainly for athletes, weighing in at over 33 pounds. With the help of Finnish manufacturer Prenta, they were able to print the outer parts of the spinner on their M3 machine and gave it a diameter of nearly one meter.

Lemonade stands, mowing lawns, babysitting, these were the ways kids use to make their money, but not 13-year-olds Max Lawson and Ethan Carr. These two of Manassas, Virginia received 3D pens as B-Day presents, and after playing with them, they decided to step up a notch and give 3D printing a try.

Max and Ethan’s parents decided to buy them a Da Vinci Mini 3D printer, and like honest entrepreneurs, they repaid them after generating an income from selling their fidget spinners. Eventually, they started EMP Printing, short for Ethan-Max Printing, and took their products to various craft shows and selling them at community events, on average making around $100 per event. 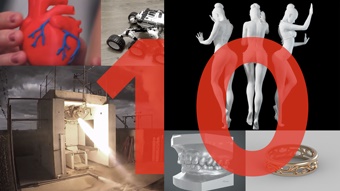