It is somewhat of a peculiar tandem when nature meets technology. Surely, agriculture now uses a lot of machinery to speed up tedious processes but some of such pairs maybe just at the reach of your own hand. Certain plant species date their ancestry to millions of years back, while others get planted into pots from plastic, which was invented just around 1907. And as we see lots of 3D printed gardening projects, we can’t help but wonder if this two mix well at all.

First, let’s kick some history out of the way just to establish how we came to this. Flowerpots trace their history back to ancient Egypt. Sure enough, they weren’t using plastic ones but rather clay - which is still used today (mainly in a form of terra cotta) as its porous nature allows much-needed humidity.

Then, as mentioned, synthetic plastic popped up in 1907 patented by Leo Baekeland, though another inventor, James Swinburne, was racing towards it as well. It was a phenol formaldehyde, christened Bakelite - a dark brown resin sometimes mixed with asbestos (in the tradition of the early 20th century). A bit later clear versions were produced and gained popularity due to their amber look. 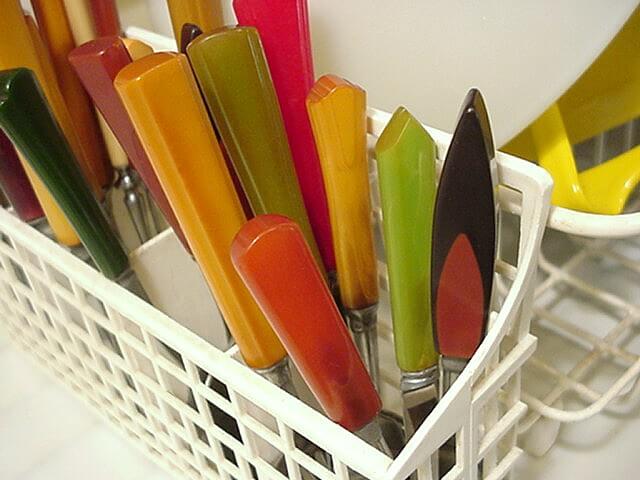 Soon many industries started to include plastic in their manufacturing and flowerpots caught up to that hype. Planters became more lightweight and the whole revolutionary vibe of plastic use made its way into peoples’ homes.

Then came the 1980-s with the invention of 3D printers. Though, those didn’t start printing flowerpots right away. That came to exist later on with more affordable FFF/FDM 3D printers available for ordinary people to buy and tinker with. And this is how we now have lots of creative independent designs for plant pots and garden devices that delight the eye.

Is plastic safe for plants?

In general, plastic containers are safe for flowers and plants, they don’t harm or kill them. There can be a small number of chemicals going from plastic to the soil but it’s commonly very low and washes away during watering. 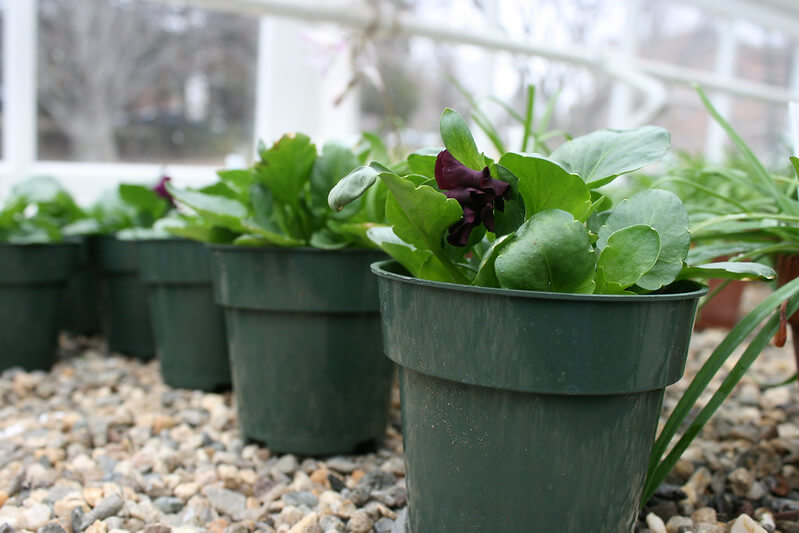 Plastic pots will actually suit some people better. Plant owners who might be forgetful in regards to watering plants have a better shot with plastic planters as they retain the water. Additionally, they can be better when dealing with sterilization - in cases of fungus infection or when re-purposing a pot.

However, that is the general consensus for pre-made plastic planters, which are commonly molded or formed from resin and have no pores. When it comes to 3D printing, it becomes a bit different.

How are 3D Printed flower pots made?

The subtle difference between a factory-made planter and a 3D-printed one is the technology behind it. With mass-produced items it is commonly molding or sheet forming - to put it simply, heated resin (or sheet) gets pressured into a form and then cooled down. Such methods leave a glossy solid surface.

That is very different from most 3D printing technologies, which work layer by layer.

The popular desktop tech for home tinkering is FFF/FDM, where strings of molten plastic get layered on top of one another according to the code. While the end piece is solid, it still has tiny gaps of air trapped between the layers. As a result, 3D printed planters will have these pores, which will be prone to catching some residue.

Similar issues can occur with a more professional SLS technology. While it works differently, its results are also typically porous. Add to that the most common material being nylon, which loves to absorb moisture from the air and then yellow.

DUP or other resin printing types likely won’t have the same trouble. Those are definitely solid but the average build volume and resin costs make them a very inefficient method to use for fan-made garden devices.

Don’t worry though, we’ll offer some potential troubleshooting methods to keep your greens, well, green. But before that one more important factor needs to be addressed.

What 3D Printing materials are safe for plants?

Talking about store-bought flower pots, we commonly see them described just as “plastic”. In practice, that commonly means polypropylene (PP), ABS or polyethylene. Probably that’s due to their low cost and density, which creates a lightweight pot that we all are familiar with.

3D printing lovers probably have spotted a familiar name here - ABS. So, should you print your planters with it? ABS is notably hard to work with as it requires constant temperature and, typically, an enclosure to prevent random delamination. As for its safety for living things,its petrol nature certainly scares some people from using ABS for growing greens. 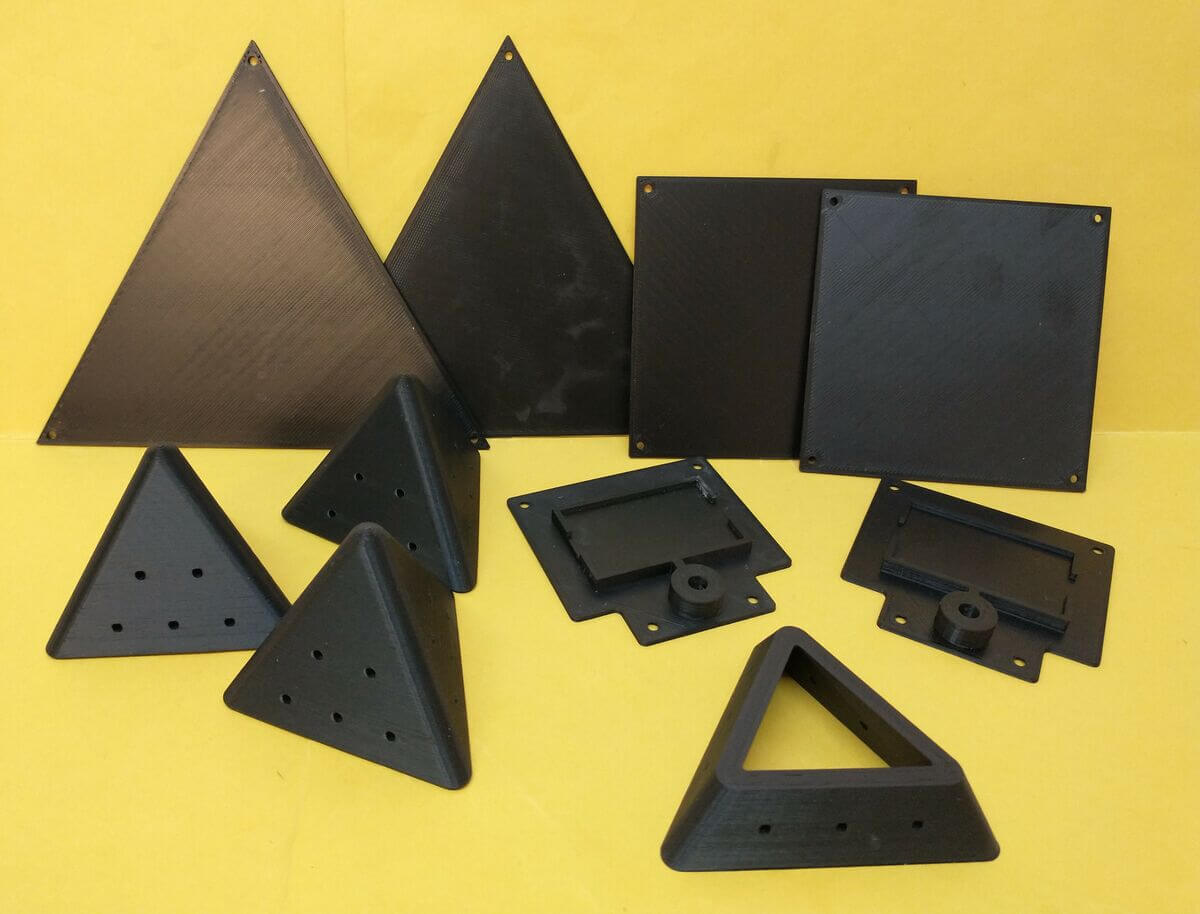 3D print in ABS by Speedy3D

From the safety data sheets, Acrylonitrile-Butadiene-Styrene Copolymer seems to have the main hazards associated with fire and fumes rather than degradation or release of chemicals. Typically filament manufacturers suggest “prevent entry [of ABS] into waterways, sewers, basements, or confined areas”. And the ecological graph shows some acute (short-term) toxicity to fish, algae, and invertebrates. Obviously, that means you should dispose of your ABS creations responsibly and not throw them into bodies of water to rot. As for the plants and flowers themselves, the amount of chemicals released from ABS 3D prints into the soil is expected to be minuscule and not harmful.

There are cases of people using a natural (with no dye) ABS even for their aquariums but we’d suggest utilizing it for projects with less water contact, especially when uncoated. Temperature-wise ABS can withstand from about −20 to 80 °C (−4 and 176 °F). It is also moderately UV resistant and can be used for outdoor garden pots. Longer exposure will increase its weathering but in comparison to other filaments, this one is potentially the best for outside projects. 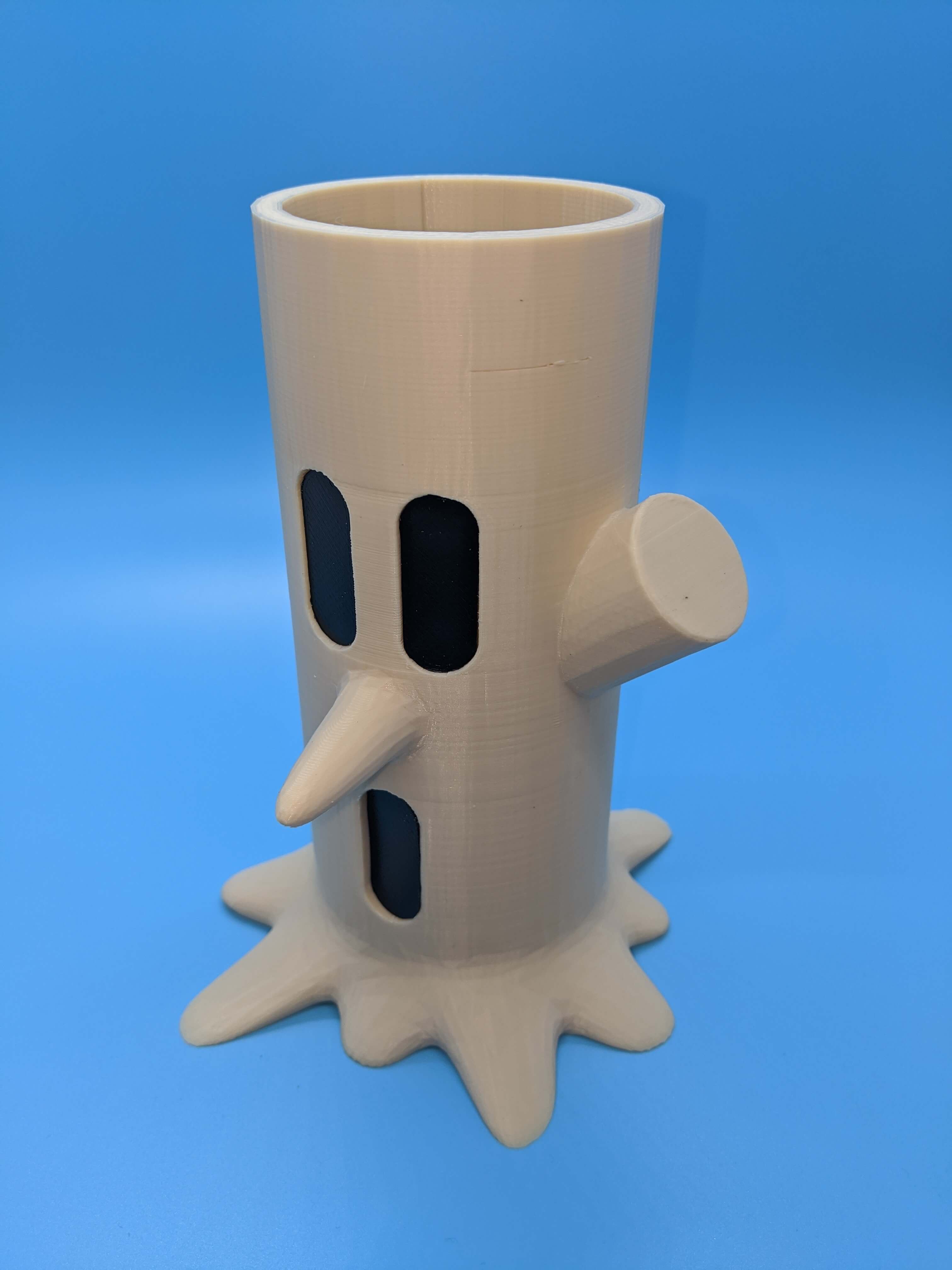 The most comfortable to 3D print with and, thus, popular material is PLA (Polylactic Acid). This plastic is widely used for plant pots and garden projects, too. On the surface, PLA is an eco-friendly filament with a cute origin story about sugar cane. And one of its suggested disposal methods is a landfill. As a plot twist, PLA’s praised biodegradable character makes it actually, well, degrade in water and soil. You won’t lose your planter within a week, surely, as it takes many years for such a plastic to completely decompose. However, it will slowly break down, especially exposed to both water and soil. That reduces its use in the garden itself, especially for the items that you put directly into the dirt. The plastic itself is shown not to leach into the soil or water but the lifespan of the project itself will be shorter.

Additionally, PLA’s maximum temperatures are lower at about 126 °F (52 °C). That means a PLA flower pot better suits indoor plants, especially if they won’t be in the direct sun for long periods of time. For planters with longer sun exposure we’d recommend looking into PLA composites with better temperature resistance (like HT-PLA). 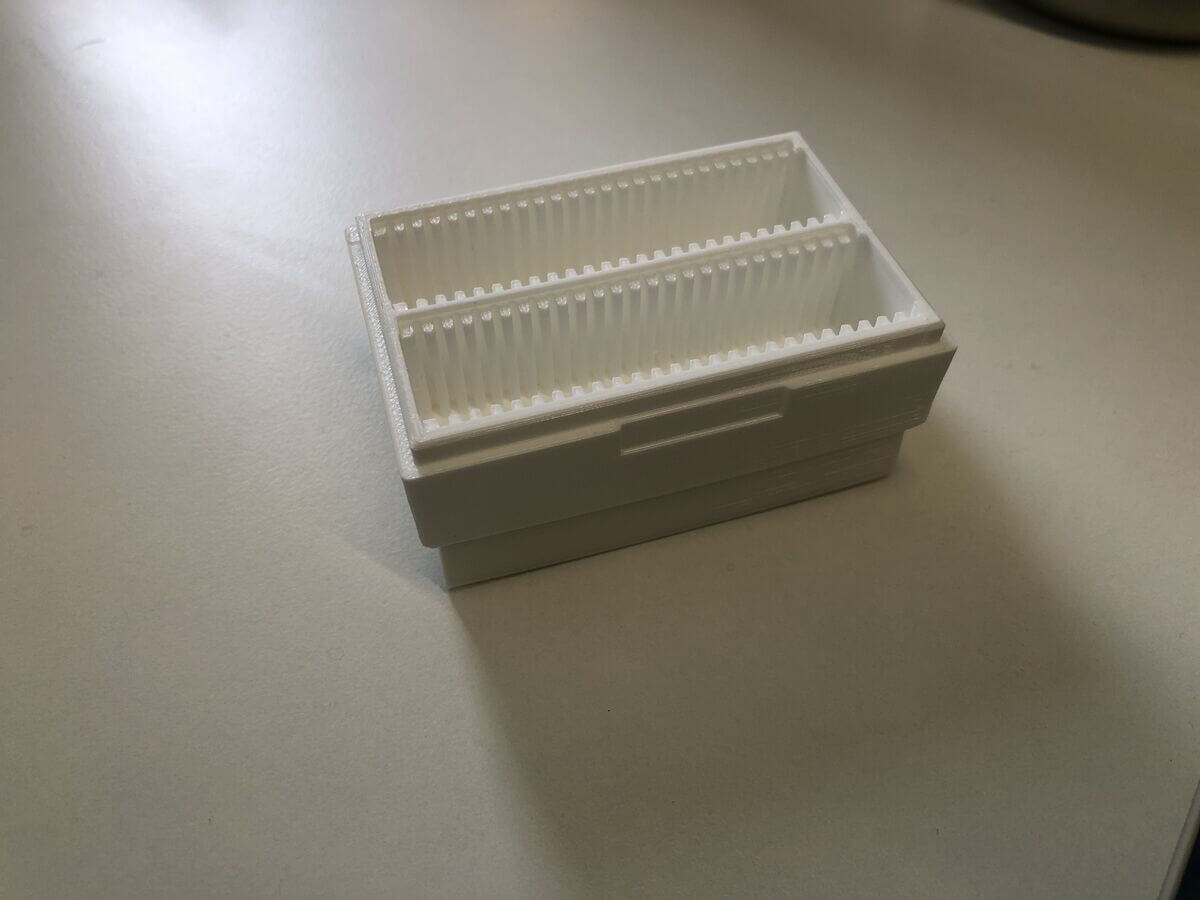 Polypropylene, or PP, is another material used for store-bought plant pots, which can be 3D printed. This plastic is actually stronger than ABS and withstands higher temperatures.

Respectively, it is more difficult to print with and requires greater nozzle and bed temperatures to turn out well. Polypropylene is commonly used for mechanical components rather than house projects, which limits the color options manufacturers offer. Overall, it is safe to print with PP, especially natural ones, for plants and gardening. But the difficulty of PP along with its higher cost makes it a questionable choice for plant pots.

Wood PLA is a composite material based on Polylactic Acid with the addition of fibers of dust from woods. It is still plastic but its appearance and color remind of a wood texture. This composite can also be stained to really impressive results.

Its thermal characteristics are close to PLA, which it is based on. However, printing this composite can be slightly more challenging and result in more gaps between the layers. Thus, we’d recommend coating the inside to prolong the lifespan of the creation. Redditors share that wood glue can work for this material.

Another PLA type worthy of testing for flower pots is Silk or so-called Shiny PLA. The peculiar feature of this plastic is its shiny and smooth appearance. Printing artifacts are more visible on this type of filament but if printed well, the results turn out gorgeous.

Usage properties for Silk PLA are also similar to regular PLA, so outdoor use during sunny weather should be limited.

What issues can you face with 3D printed flower pots?

Most plastics for 3D printing are relatively safe and don’t emit chemicals until heated to their melting point. That means when you decide to use a printed planter, you should use it accordingly and avoid long exposures to direct sunlight or hot temperatures (especially for PLA). In case of repurposing a planter and washing it, make sure to avoid hot water as it can deform a 3D printed planter.

Another concern to keep in mind is the tiny pores between the layers. They won’t make trouble during regular watering and caring for a plant. However, in the case of plants that catch a disease and call for sterilization of a pot to kill mold or fungus, a 3D printed planter may be harder to get rid of the left infected water and soil. In that case, it might be better to repurpose a pot in a different way to prevent new plants from inheriting the disease.

How to expand the life of a 3D printed flower pot?

One popular way to ease your mind about chemicals and pot degradation is to coat a planter with a sealant. You can coat it on the inside, outside, or both depending on what you’d like to troubleshoot.

Applying a protective coating on the inside will seal the pores between the layers and ensure that soil and water won’t degrade the inner diameter of a planter.

The outside coating can boost UV and weather resistance, which is handy for outdoor garden 3D prints. It can also be used to prevent leaking from a planter or a self-watering pot.

For ABS pots specifically acetone vapor smoothing can be used to seal the print and give it a glossy finish, though, this technique must be used by an experienced and cautious user.

While 3D printed planters and garden projects are a bit different from store-bought ones, they are undeniably more diverse and creative. Here are some of the amazing planter designs worth checking out. 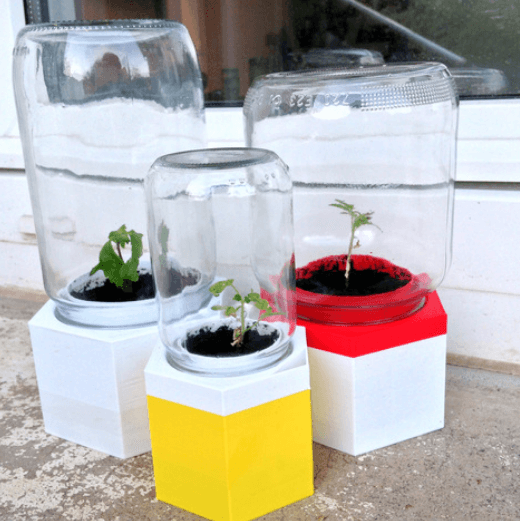 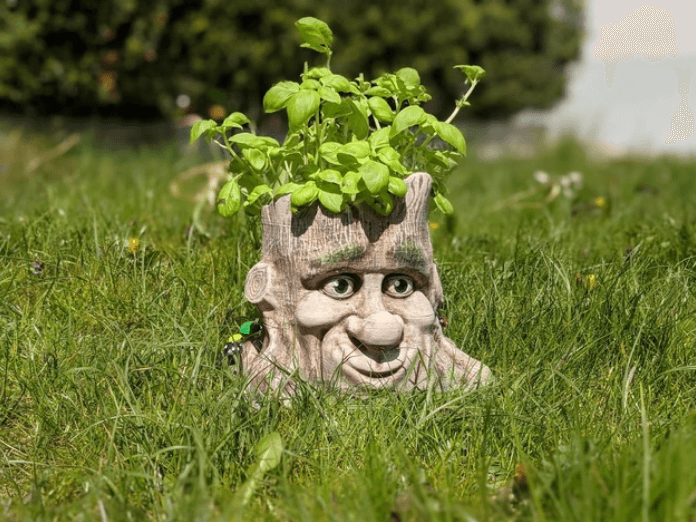 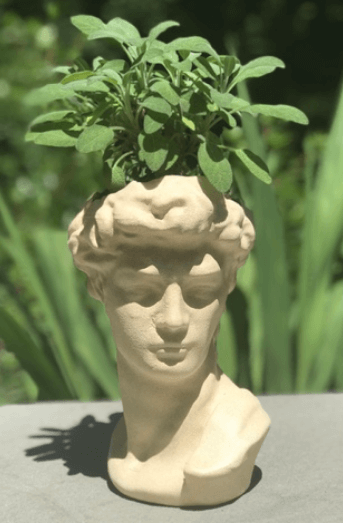 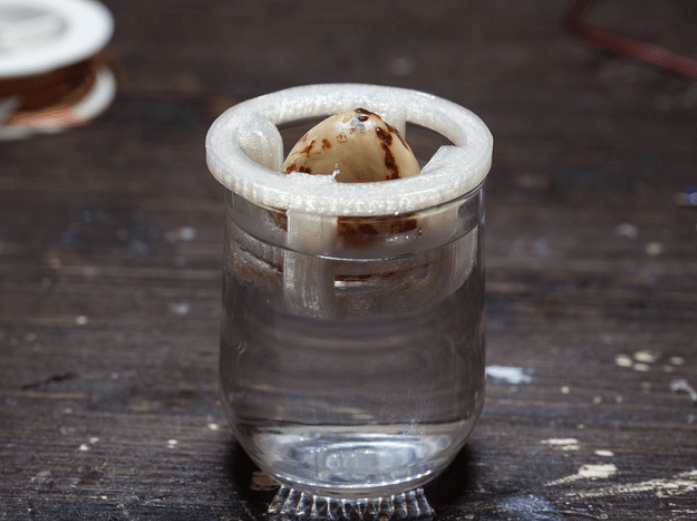 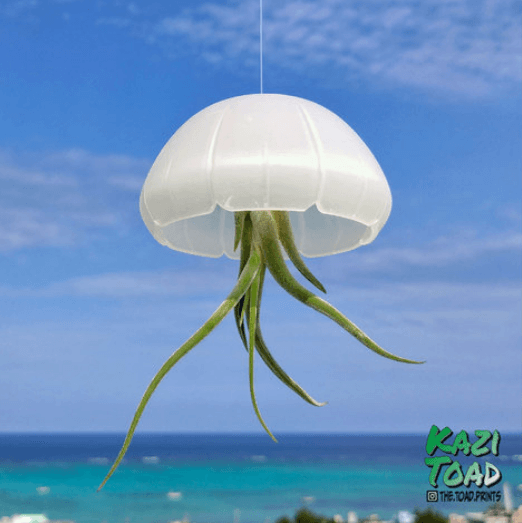 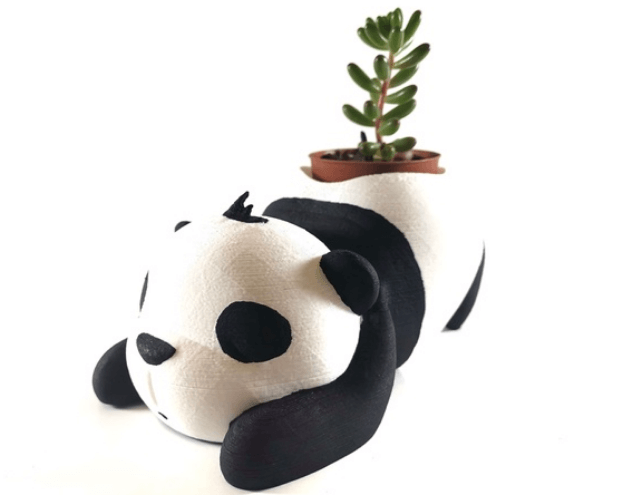 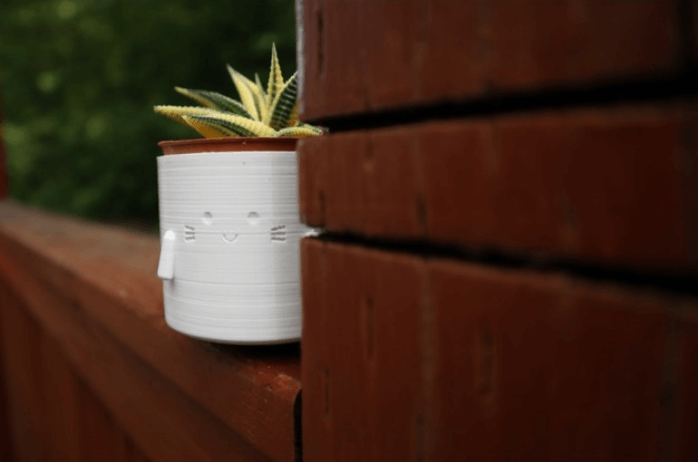 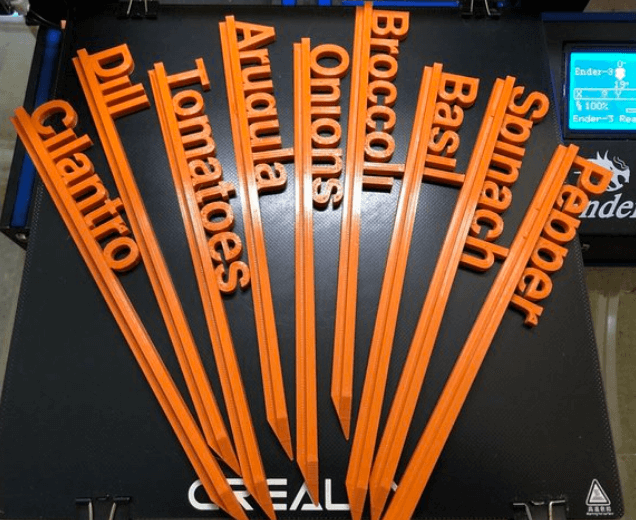 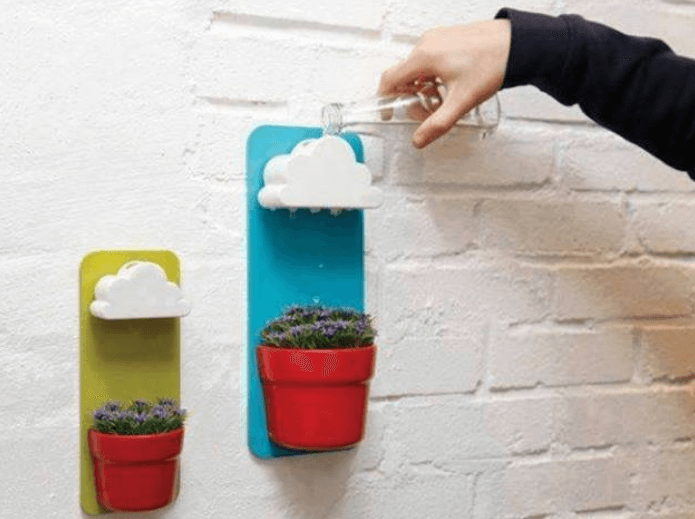